The Donn V. Hart Southeast Asia Collection at the Northern Illinois University libraries includes a large number of books, periodicals, microform sets, pamphlets, manuscripts, and videos. Materials from and pertaining to the eleven Southeast Asian countries are available in English and in vernacular languages. It is indeed one of the best collections for Southeast Asian studies in the country.

A certain number of selected books and manuscripts from this collection have been digitized and made available. There are other digitized materials also included which are not a part of the Donn V. Hart Southeast Asia Collection. 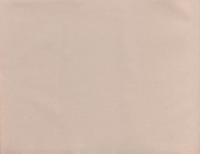 An English and Burman vocabulary
Preceded by a concise grammar in which the Burman definitions and words are accompanied with a pronunciation in the English character designed to extend the colloquial use of the Burman language.

The Thirty Seven Nats. A Phase of Sprit-Worship prevailing in Burma

Dhammapada Athakattia Nissaya
This palm leaf manuscript from 1922 AD contains a translation, from Pali to Burmese, of portions of the sacred Buddhist scriptures, or Tipitaka. The leaves, with gilt edges, are bound by red lacquered boards, twelve lines to a page. Other titles: TipiÃ¡Â¹Â­aka, SuttapiÃ¡Â¹Â­aka, KhuddakanikÃ„Âya, Dhammapada. Donor: Luu Foundation.

Kammavasa
[16] leaves; Lacquered Copper Plates. Completed sometime during the 1800's this kammavaca is made from thin copper plates that have been lacquered and bound in wooden covers decorated with red and yellow figures and designs. The text, written in the Pali language using the square style Burmese script, covers ordination ceremonies for Buddhist monks. 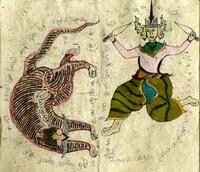 [Shan Parabaik]
Small black paper note book with plain wood cover; written with ball pen, pencil, and col. pencil., The final three pages, recto are texts about the powers and vulnerabilities of children at certain critical ages, and about how to protect them at such junctures., Donor: Burma Studies Group.

Parabaik
[20] p. on one folded sheet. Black notebook with notes on two land disputes and their settlement, a trial by ordeal, a verse on fortune telling, on the way of the King as found by Jatakas, commentary on religious works, list of loans made by Ma Rham Ma and Maung Hpe, and a list of gifts received on occasion of sending a son as novice to a monastery. White script on continuous sheet of black paper folded fanwise (18 folds). Ms. Donor: Burma Studies Group., I. AD 1873: The expenses of a land dispute were Kyats 120 and Ma Rhan's share was Kyats 61.5 and Maung Pya could pay only Kyats 30 and for the remainder he gave a nusery plot where seven baskets of seeds mixed (each time to raise the seedlings of paddy) in mortgage to Ma Rhan., II. Land dispute between Nga Hsan and Mi Rhan was settled by abitrarion by U Rwet, Donor of Taung Na Htein monastery, village headman on September 5, 1873., III. Judge Maha Min Hla Yaza allowed a trial by ordeal (of burning two lamps simultaneously and the owner of lamp that extinguishes early lost this case) on August 1873., IV. A verse on fortune telling, V. Various information on the way of King as found in Jatakas, and commentaries on religious works., VI. List of money given on loans by Ma Rhan Ma and son Maung Hpe. The list was compiled on May 18, 1868., VII. List of gifts received on this occasion of sending a son as novice to the monastery on February 28, 1880.

Kammawa-sa
[30] p. : col. ill. Ivory Plates. Made of thin and very fragile ivory sometime in the mid-1800's, the plates of this rare and beautiful kammavaca contain black and gold square style Burmese script and are bound by red and gold decorative wooden boards. Decorations on first leaf and at ends of second and third leaves. Some leaves chipped and worn. Manuscript enfolded in purple and gold wrapping. Donor: Burma Studies Group. 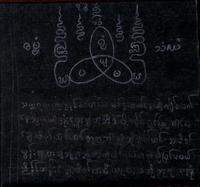 Purabuik
A fascinating description of the art of Burmese ritual tattooing. This Parabuik was written sometimes around the end of the nineteenth century to guide people in the use and meaning of specific tattoos. The text is written in pencil and red and black ink on one continuous strip of white folded paper and bound with black lacquer cover. Donor: Burma Studies Group

Abhidhan Nissaya
One of fourteen parabaik manuscripts that make up the work Explanations on Dictionary of Pali. White script on continuous black paper folded fanwise (19 folds).

Parabaik
Painted illustrations of Jataka and Ramayana figures, some captioned and allocated to days of the week, astrological calculations. Black script on one side and colored illustrations on the other side of continuous sheet of white paper folded fanwise (13 folds). Outside folds black with red ink. Ms. Donor: Burma Studies Group.