Around the time of Vietnamese independence from China in 939 CE, Vietnamese scholars invented Chữ Nôm as an ideographic script to represent Vietnamese speech. From the 10th century and into the 20th, much of Vietnamese literature, philosophy, history, law, medicine, religion, and government policy was written in Nôm script. During the 14 years of the Tây-Sơn emperors (1788-1802), all administrative documents were written in Chữ Nôm. Approximately 1,000 years of Vietnamese cultural history is recorded in this unique system. This heritage is now nearly lost. Most Vietnamese cannot read Nôm. Most of its texts are in physical peril, destroyed by wars, fires, humidity, and bookworms.

The Vietnamese Nôm Preservation Foundation was founded in 1999 as a nonprofit agency devoted to digital preservation and study of 1000 years of writing in Chữ Nôm. Since then, the Foundation has taken the lead in the preservation of Nôm: by electronic font carving, by entering ideograms into Unicode and the International Standard (ISO), by representing Nôm script at the international meetings of the Ideographic Rapporteur Group, by publishing the first modern dictionary of Nôm in True Type Fonts, by sponsoring two international Nôm conferences, and by digitization of Nôm classics for internet display.

For the SEADL collection of Southeast Asian works in the vernaculars and in the arts, we are pleased to present works of poetry written in the ancient script, including the sung oral poetry known as Ca Trù which is undergoing a modern revival. Few have seen these works which have not been previously accessible outside of Vietnam. 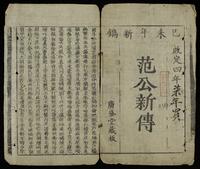