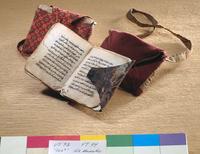 Naskah Mystiek
Hikayat Abeuko Karim, a text for instruction, describing the principal truths of Islamic faith together with laws of purification and prayer. In some versions the author is named teungku seumatang.