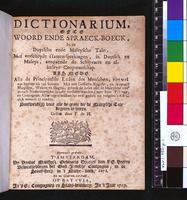 Dutch Malay Dictionary
Malay, being the lingua franca of Southeast Asia, was the chosen language for travelers and entrepreneurs in the region. A good dictionary was a must thisone Dictionarium of the woord ende spraeck boeck in de duytsche ende Maleysche tale. A dutch malay dictionary was first published in Amsterdam in 1673 but reprinted in Batavia in 1707. Maleische Woordboek-Collectanea Malaica
As international trade increased, so too did the need for printed book. Maleische woordboek/collectanea Malaica is a malay vocabulary book in dutch and latin written by Andries Lambert Loderus and printed in batavia in 1707. Vocabularium
Page from a Dutch Malay vocabulary book published in 1623.