A marionette is a type of puppet that is controlled by a manipulator with wires or strings from above. Marionettes are operated with the puppeteer hidden from the audience by using a vertical or horizontal control bar in different forms of theatres. In the country of Burma, marionette puppetry has played an important role in the history and development of dramatic art and culture over the last 500 years. Burmese puppetry served as a means of making people aware of current events; as a medium for educating people in literature, history, and religion; as a display of lifestyles and customs; and as mouthpieces for the people in the days of royalty.

The practice of traditional marionette puppetry in Burma has waned over the decades, and is on the verge of becoming a lost art form. In 1986, Mrs. Ma Ma Naing and Mrs. Naing Yee Mar formed the Mandalay Marionettes Theater as a step in saving this rich legacy. This troupe has been working to preserve Burmese puppetry and original Burmese traditions such as Burmese dancing and music, sculpture, sequin embroidery and painting.

The Mandalay Marionettes troupe has contributed an assortment of performance videos to the SEADL. Included in these is an introduction and overview to the Burmese marionette tradition; a ritual dance that is done to respect the Nats, or the guardian spirits of the area; the Himalayas dance, featuring the horse, monkey and demons; and a dance of an alchemist or the Zaw-Gyi dance. Daw Ma Ma Naing, one of the founders of the Mandalay Marionettes Theater, also gives a brief history about marionettes. Other videos highlight the skills of the puppeteers themselves, while demonstrating the dance of the two royal pages; a humorous dance performed by two villagers named U Shwe Yoe and Daw Moe; a dance between a human being and a puppet; a romantic and sentimental dance called "Myaing Da;"and a performance from the Ramayana epic where Rama chases a golden deer for his princess, Sita. 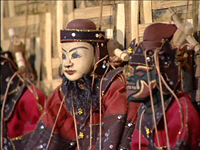 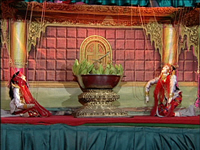 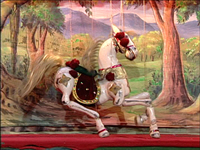 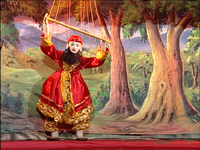 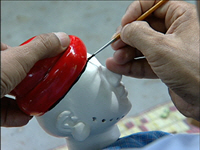 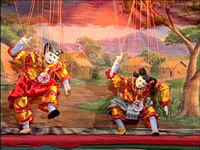 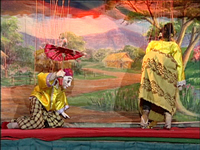 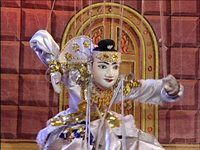 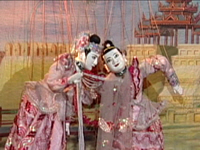 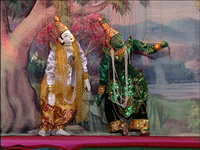 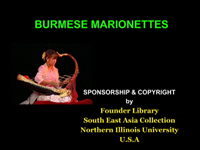